COLA – Cloud Orchestration at the Level of Application 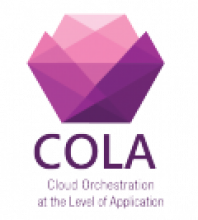 “COLA has benefitted from the CloudWATCH2 MTRL training. It’s helped us to realise the importance of clarifying our service offering as early as possible in the project so that technological development is aligned with this.”
Tamas Kiss, University of Westminster & Coordinator, COLA

The COLA project develops a toolkit, MiCADO, that aims to solve the cross-domain problem of satisfying dynamic demand side consumption with elasticity on the supply side. CloudWATCH2 assessed the COLA project in June 2017.

This problem is well-known in the electricity market, where the entirety of consumers extends a relatively stable base demand driven by long-running electricity consumption needs (e.g. industry), regular oscillating needs (private consumers in day-and-night consuming rhythm), as well as almost entirely unpredictable demand spikes influenced by external factors such as weather. The supply side response in this example is limited in its dynamicity due to power plants requiring significant lead-in times for their respective start-up and shut-down phases, and volatility of e.g. renewable energy sources (particularly PV and wind energy).

The same holds true for the IaaS cloud computing market, while intrinsically designed to be elastic is increasingly operating on the same economic grounds as the electricity market. While elasticity is desirable, on the supply side it is challenging to predict completely elastic/random usage patterns and that typically results in overprovisioning with its associated costs being passed on to the consumer. It is small wonder that on-demand resources cost about 4 times as much as regularly provisioned and reserved resources.  Although at a much smaller scale, while demand side IaaS-based cloud computing has the same characteristics of sustained base load and unpredictable/erratic peak load, supply side is also facing lead-in times for provisioning and decommissioning the underpinning hardware – and a peculiarity of IaaS service delivery and consumption: To a large extent, IaaS resources are still manually provisioned through a GUI, with automation based on a few well understood machine-level metrics such as high CPU load triggering provisioning, booting and integration of another VM into a cluster of worker VMs.

However, true application-level orchestration requires a deeper understanding of application (high) performance and associated metrics: A high CPU-load is not always an indicator of a deteriorating application performance; therefore, a different set of metrics and automated actions need to be developed to allow automated IaaS provisioning according to application-level and user-defined Quality of Service metrics. The COLA project’s MiCADO framework allows exactly that.

The COLA project self-assessed a score of (MRL: 1 : TRL 4 ), whereas we assessed the project with a score of (MRL 1 : TRL 3.5). This is a common situation for 30 month long projects: Pure research projects often start at TRL 2 or even lower, while Research and Innovation Projects often start at TRL 3 and at times at TRL 4. In contrast, the H2020 SME Instrument requires technology at TRL 6 or higher for applications to be eligible for SME Instrument phase 2 projects: This simply reflects the different stages and aspirations of projects and their financial sponsors.

The project clearly addresses perceived market needs pains, and can describe them, however not yet in satisfactorily mature user stories and scenarios. There is no discrepancy between external and internal perception and assessment of the current state of affairs, which is encouraging for future project progress.

At the time of the assessment, the project had almost 2 entire years of activities ahead of it. With the IaaS market rapidly maturing towards a utility market, the COLA project is currently still ahead of the curve with the market applying itself to COLA for the toolkit it is developing. Yet, the dynamicity of the market requires COLA to implement effective innovation management and be alert to competitive threat. COLA needs to stay very attentive, observant, and agile in its ability of incorporating new developments and disbanding obsolete components.